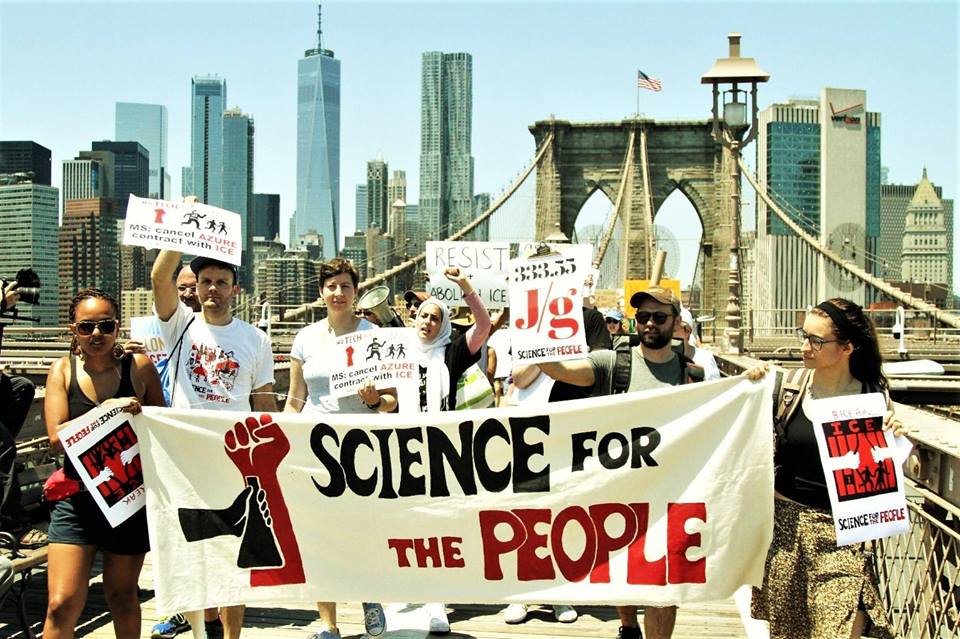 For the New York City chapter of Science for the People, the past few months have been defined by newfound potential to mobilize people power and grow our roots within the surrounding activist community. For many of our public appearances, we partnered with activists from organizations such as Democratic Socialists of America, Movimiento Cosecha, and Columbia’s Graduate Worker Union. In these efforts we strove not just to band together at public demonstrations, but to nurture our allyship through ongoing collaboration–giving organizers the floor to present at our bi-weekly chapter meetings, hosting art-build parties at apartments and public spaces, and leading topical discussions that related to the campaigns we’ve supported. Additionally, we’ve forged goodwill with local venues such as Verso Books, Bluestockings, Caveat, and Star Barr, where we hosted and co-hosted panels, fundraisers, film screenings, and even participated in science-themed nightlife events.

During the summer, amid the disturbing reports of the Trump administration’s xenophobic immigration policies, we launched a campaign to implicate the use of scientific developments, specifically in the tech sector, to expand militarism and enable governmental agencies to further violate human rights. As workers at major tech corporations began to demand accountability from their employers, we amplified their message in order to draw attention to the connections between corporate control of technology and human marginalization and de-normalize the practice of prioritizing profit over people. Our campaign started small, with a series of efforts such as: petition sharing, leafleting, picketing, and joining protests with our tech-implicating messaging. By July 31st, the influence of our campaign reached a culmination point, as we mobilized hundreds to take to the streets in heeding Cosecha’s national call for action.

After weeks of planning in collaboration with Cosecha NYC, organizers within our chapter staged a picket, march, and civil disobedience, where we disrupted midtown rush-hour to demonstrate at flagship Microsoft, Salesforce, and Amazon locations in the city. At the brick-and-mortar Amazon on 34th street, we created a booming spectacle with protestors chanting and singing and the Rude Mechanical Orchestra driving the energy with boisterous music. We shut business down with a human blockade that dared to hold the line until put under arrest. Coming out of this action we leveraged our momentum to draft a solidarity letter with tech workers, assist in the establishment of a NYC Tech Workers Coalition chapter, and raise awareness by picking up media attention.

As fall set in, we shifted to strategy and outreach events by supporting academics, authors, and community organizers in the execution of panels, discussions, and rallies. In the spirit of SftP’s legacy of international solidarity work, we supported Scientists for Palestine in executing the Second International Meeting for Science in Palestine, a multi-day conference that brought together academics, students, and scientists from Palestine and the international scientific community to collaborate on implementing concrete plans to bolster the access and achievements of scientific pursuits for Palestinians. Locally, we engaged with the community through Verso’s climate change panel series, where we expanded our network with SftP flyers, merchandise, and newsletter sign-up sheets in tow.